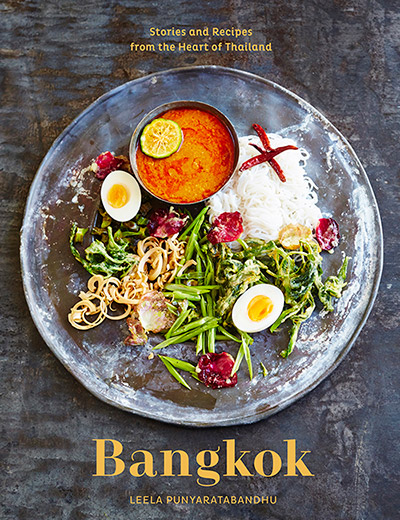 Bangkok: Recipes and Stories from the Heart of Thailand is a collection of recipes that represent the uniqueness of the culinary tradition of the city of Bangkok as well as essays that reflect Leela’s life of a born-and-bred Bangkokian. On a more practical side, Leela has demonstrated in this volume how she has made her favorite dishes from her hometown in her kitchen in the American Midwest and how her readers can do so as well.

J. KENJI LÓPEZ-ALT
“Early in the morning after my wife and I arrived in Bangkok from Chiang Mai we dutifully boarded the BTS towards Mo Chit, taking the second exit at Saphan Kwai station, passing the 7-Eleven, and taking a sharp turn down the alley next to the Boots drugstore until we saw a wall covered in hanging chickens. We ordered a portion of Khao Man Gai (Bangkok-style Hainanese chicken rice) and say, picking at slivers of impossibly moist chicken and a pile of lovely, chicken fat-infused rice.

Before noon we were at Or Tor Kor market, working our way through a bag of mangosteens, chunks of crispy roasted pork belly, and a mountain of crab dipped in a green chile sauce. We had the most intensely sweet and juicy mango sticky rice at Mae Varee. Later on, a little past 10PM, we made our way to Convent road (right by another 7-Eleven) and, as instructed, at precisely 10:30, made eye contact with the man pushing a cart of blazing coals and ordered a half dozen skewer of mu ping–fatty pork skewers grilled until crisp and charred served with a sweet and savory dried chili sauce.

When Leela is your guide, even if only through a series of emails, you eat well. Those flavors, those revelatory bites of food should not have come as a surprise to me. I’d been an unabashed fan of Leela’s in the recipe-writing world for years.

I was an avid follower of her blog SheSimmers where she broke down the complexities of Thai food in ways that were simultaneously authentic, but also exquisitely tuned for the home cook. Nobody makes you feel like you really understand Thai food better than Leela. As her editor at Serious Eats for the few brief and glorious years that she contributed recipes as a freelancer, the highlight of my month was seeing what new magic Leela’s piece would bring to the site and to my kitchen.

Leela is the rare writer who not only has a deep understanding, passion, and respect for the cultural and gastronomic history of her home country, but also an undying inquisitiveness into cooking technique and a desire to perfect that technique for the home cook. She has the soul of a Bangkokian and the mind of a recipe developer.

Leela may have learned to cook from three generations of her family in a 19th century Thai kitchen, but she is a ceaseless tinkerer, always looking to update, adapt, and improve. This is important. It’s what makes the recipes in this book actually work (and anyone who’s cooked out of her first book, Simple Thai Food can attest to this).

In Bangkok you’ll find a book that is personal, accessible, and perhaps most importantly, jaw-droppingly delicious.”

PUBLISHERS WEEKLY (STARRED REVIEW)
Punyaratabandhu, the woman behind the popular She Simmers cooking blog and author of Simple Thai Food, expands on her previous work in this outstanding collection of toothsome Thai fare. Where her previous effort favored ease, Punyaratabandhu here focuses on authenticity.

She fondly recalls some of her favorite food memories, many of which can be traced to her grandparents’ collection of cookbooks, and shares classic dishes and family favorites such as steamed dumplings with chicken-peanut filling and fried chicken with crispy garlic. A spicy beef soup with sweet potatoes and basil is just as appealing here as in the early-19th-century cookbook where it was discovered, as is the story behind the classic Boat Relish, an ever-changing mélange of leftovers originally prepared for the king.

Punyaratabandhu does an admirable job of including recipes for all skill levels and geographies, but readers interested in recreating jade noodles with barbecued pork or a 24-hour massaman curry may run into some sourcing issues if they don’t live near a well-stocked Asian market. This is a truly remarkable collection of cleverly selected recipes. Punyaratabandhu is a gifted storyteller, and her work is an outstanding addition to the Thai cooking canon.

CHICAGO READER
“… Bangkok […] is a deep dive into the culinary landscape of a city most visitors only scratch the surface of. There’s a lot of food you won’t find on the streets, like home cooking (steamed dumplings with chicken-peanut filling), royal cuisine (fried taro dumplings with shrimp-coconut filling), restaurant cooking (fried chicken in pandan leaves) and cook-shop cooking (pork chops, cook-shop style), recipes resurrected from the dusty pages of history (pork belly-green juice curry), seasonal recipes (fire-roasted river prawns with tamarind sauce and blanched neem), Portuguese-Thai (rice vermicelli with chopped chicken curry and yellow chile-coconut sauce), Chinese-Thai (khao ka mu) and, yes, even street food (grilled meatballs with spicy sweet-and-sour sauce). It’s all seasoned with the sometimes-bittersweet memories of a lifelong Bangkokian who spends about half her time away from home, a lot of it in Chicago. 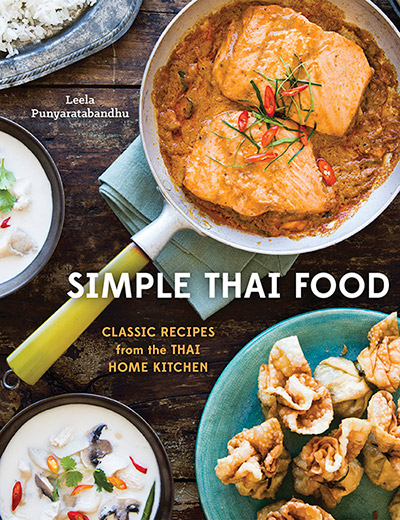 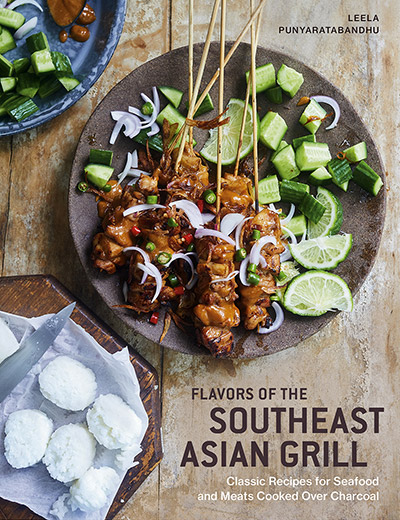 FLAVORS OF
THE SOUTHEAST ASIAN GRILL